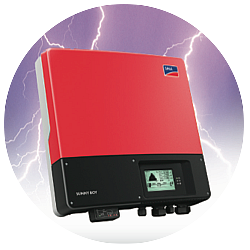 Until recently, we’ve had to begrudgingly explain to people who want to use their grid-tied solar system for backup power that the only option available was to invest in a special “hybrid inverter” and a bank of batteries, adding to the cost and complexity of the system, and putting it out of reach for many. Fortunately, the inverter manufactures have realized the need for a better answer, and have finally delivered a compromise solution.

About Inverters
Inverters are the piece of equipment that takes the DC power from solar panels and converts it to the AC power that can be used in your standard 120-volt outlets. For grid-tied systems, your inverter must perfectly synchronize your solar power with the grid power, and meet the UL 1741 safety standard, which ensures that your power immediately stops flowing back to the grid if a grid power outage is detected, in order to protect line workers from unexpected power on the line. Unfortunately, without a backup battery system and a special inverter, this meant that your solar system would shut off completely and you would be left without any power, even if your solar panels were still capable of producing it.

The SMA Solution
SMA has launched a new line of transformerless inverters, the “Sunny Boy TL-US” series. These inverters work like a normal grid-tied inverter under normal conditions when the grid power is available — it converts the DC power to AC, lets you use what you need in your building, and sends any excess back to the grid. If the grid goes down, an internal switch immediately stops sending power to your building and the grid just like a normal inverter.

However, there is a special additional circuit built in that allows you to feed up to 1,500 watts (depending on how much sunlight is available) to one dedicated backup outlet. To use the outlet you simply flip a switch, and in about 45 seconds the outlet will become activated. In many cases, this is all you need to get through an emergency — allowing you to charge your cellphone, laptop, flashlight, or run low-power gadgets.

The SMA inverter works with arrays up to 6 kW, and can be retrofitted into existing arrays.